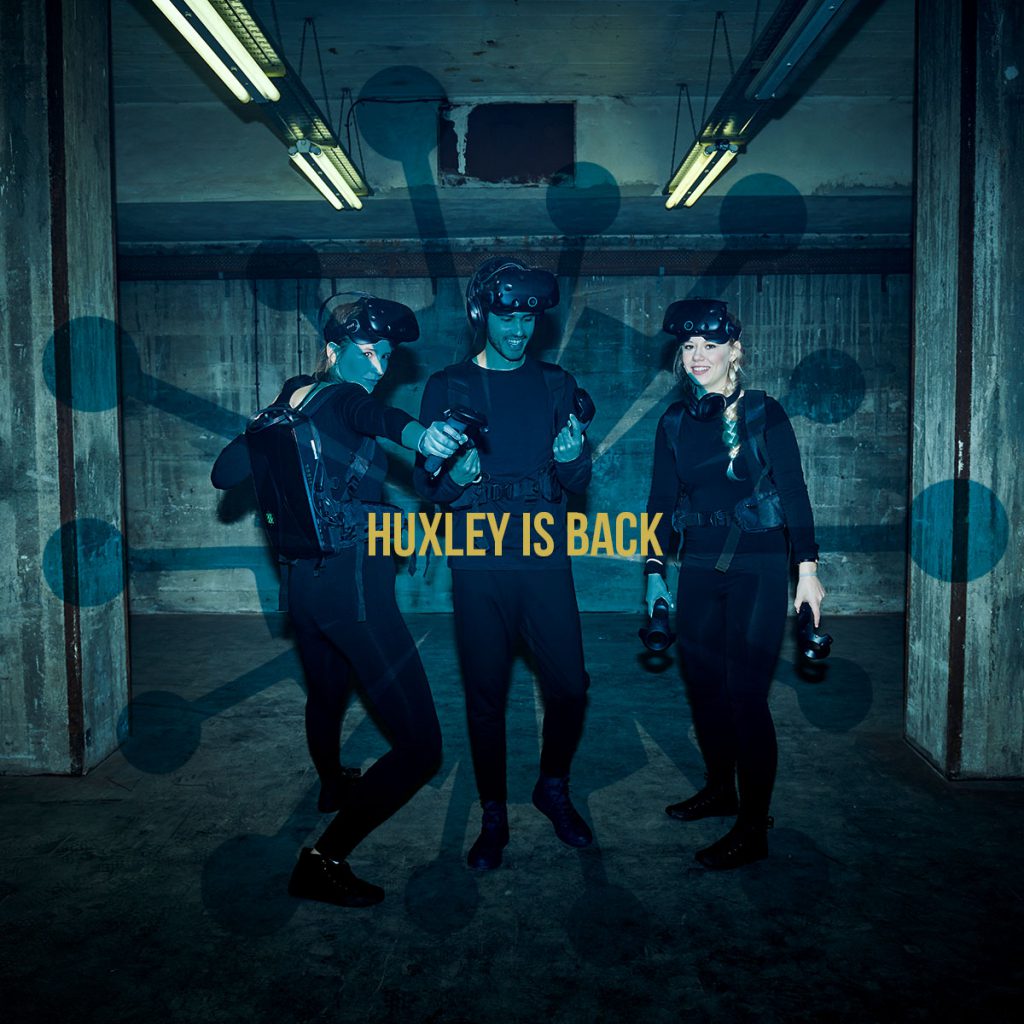 Now finally the time has come. After the world stood still for all of us a little bit, the location based businesses may now gradually reopen.
We are grateful that HUXLEY can now return to the playing fields of the world and we are happy to announce that some of our licensees, such as Den Haag and Dortmund are already offering our games again.
Of course, hygiene and cleaning measures have always been valid in the VR sector, but these are now being implemented even more intensively so that every player can feel safe and comfortable.

We will keep you up to date on the openings and look forward to welcoming you again! 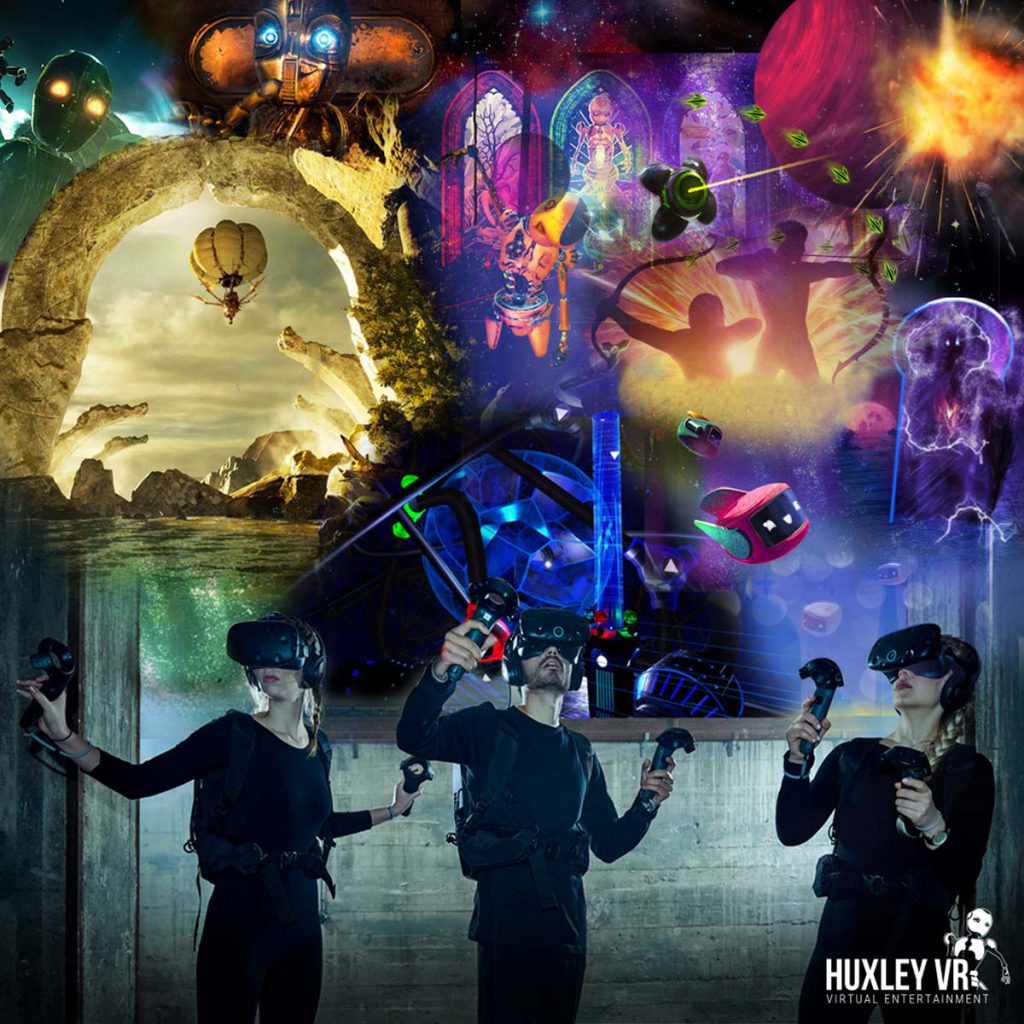 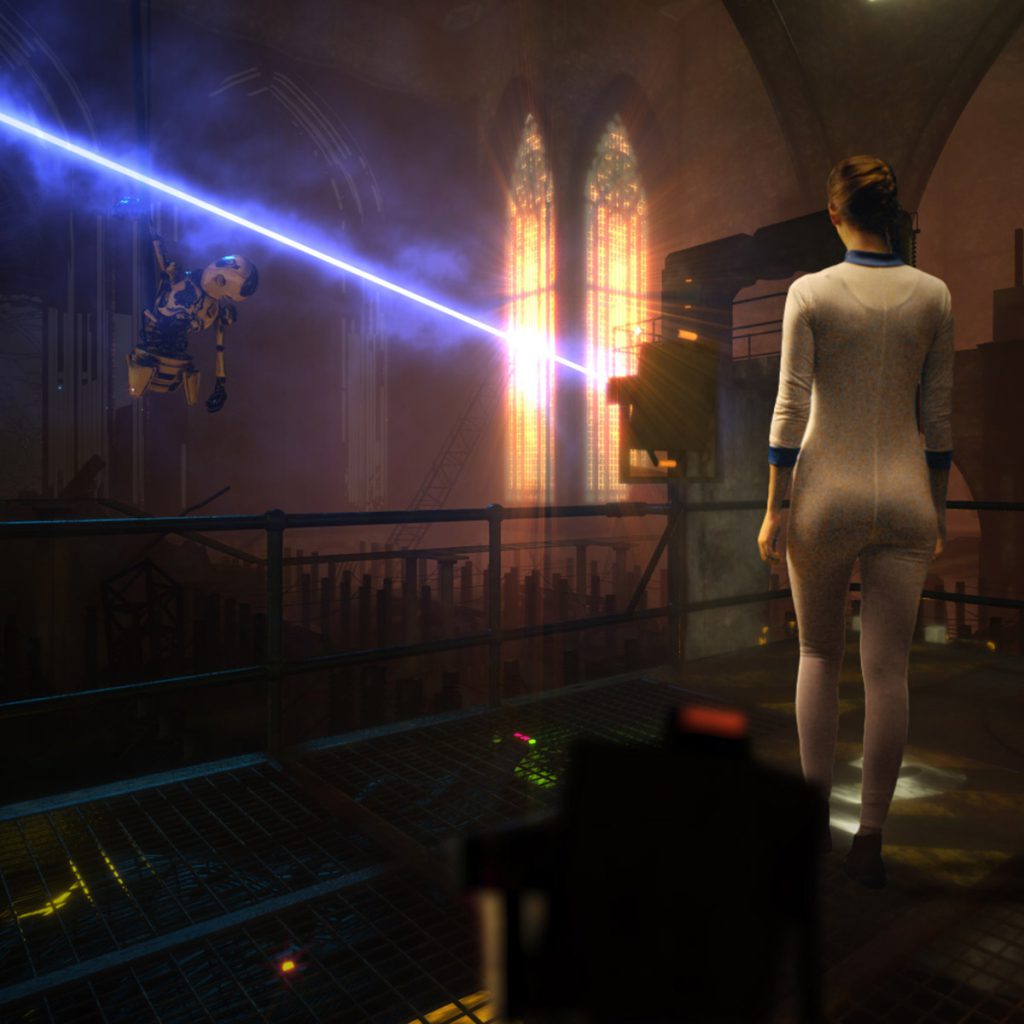 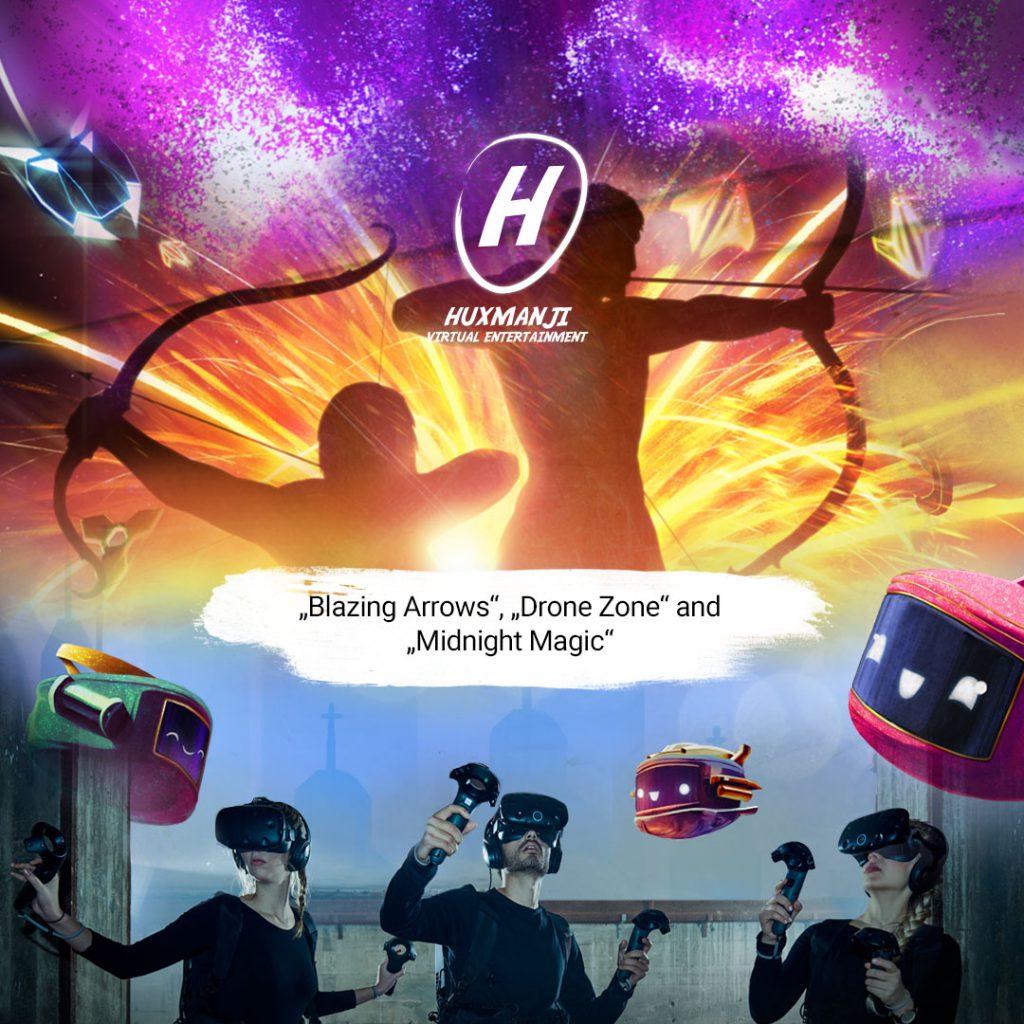 WELCOME TO THE BUNDLE

HUXMANJI is a bundle of three replayable, competitive and diverting skill-based games which perfectly harmonize with our HUXLEY blockbusters.

The games will take place in the well-known worlds of HUXLEY.

Each game will have a time limit of 3 minutes. All three games can be played separately or as a cup.

Welcome to the VR universe. The HUXLEY cosmos needs to be defeated and therefore the best shooter must be found. Compete against your friends! Get ready to shoot a variety of geometric shapes and destroy various patterns. But notice that your arrow can do more than just shoot! You can use multi shots, auto-targeting and splash damage feature. Are you ready to blast the high score?

Welcome to the VRuture. The HUXLEY city is automated, and it is your job to charge the drones of the residents with the appropriate energy. Be careful, if you wait too long, the unsatisfied drone explodes, and you lose important points. In addition, the mood of the other waiting drones drops. So, hurry up! Only the best drone servant will break the high score.

Welcome to the Night. HUXLEY is the sovereign of the VR Orient and is looking for the best treasure hunter. The purpose of your midnight boat trip is to reach as many levels as you can. An extraordinary mirror transforms your reflection into a djinn. Use his help – there are tricky puzzles lurking. Go find the jewels and get as far as you can!

<<Repeat the game. Rebeat your friends.>> 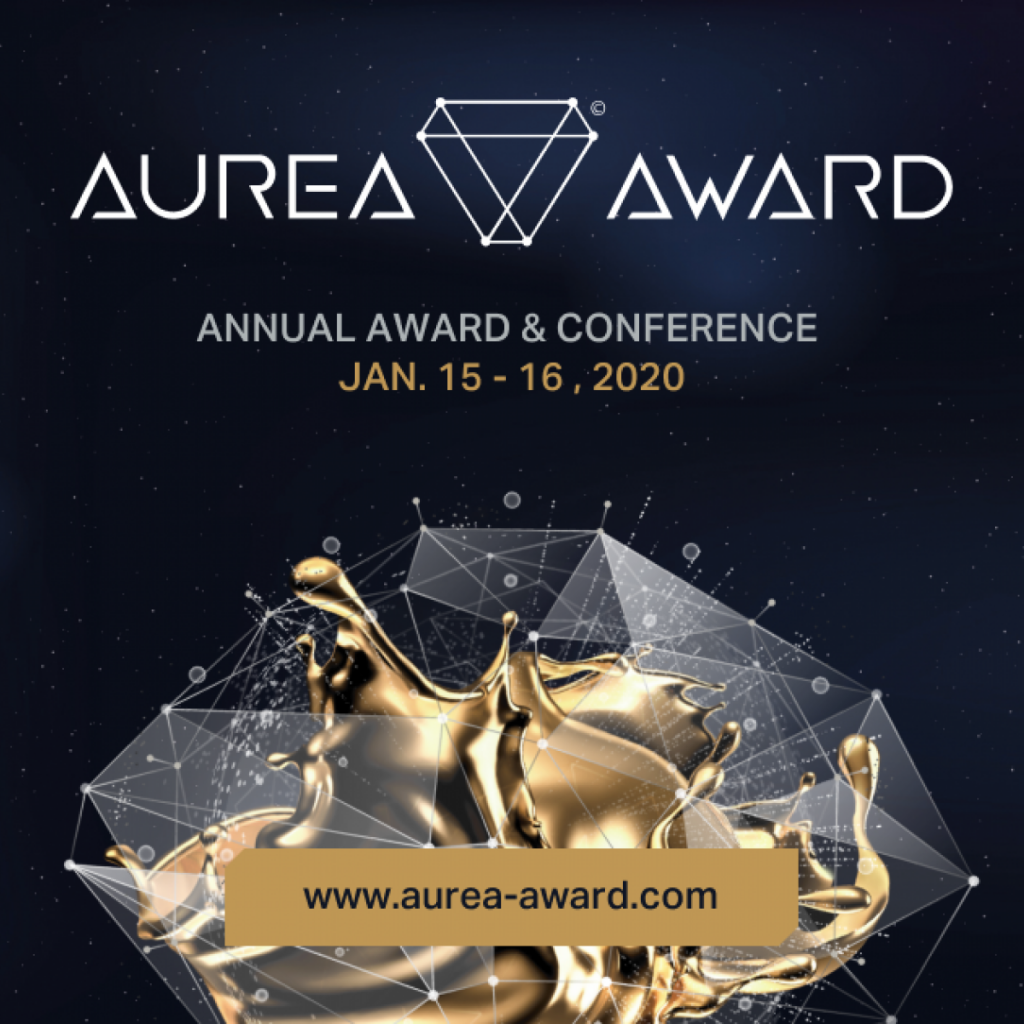 HUXLEY 2 – THE ADVENTURE BEGINS is nominated for the Aurea Award which is honoring Excellence in VR & AR Entertainment!

Therefore we are participating in the 2nd Aurea Awards Conference & Show at Europa-Park Rust in January. 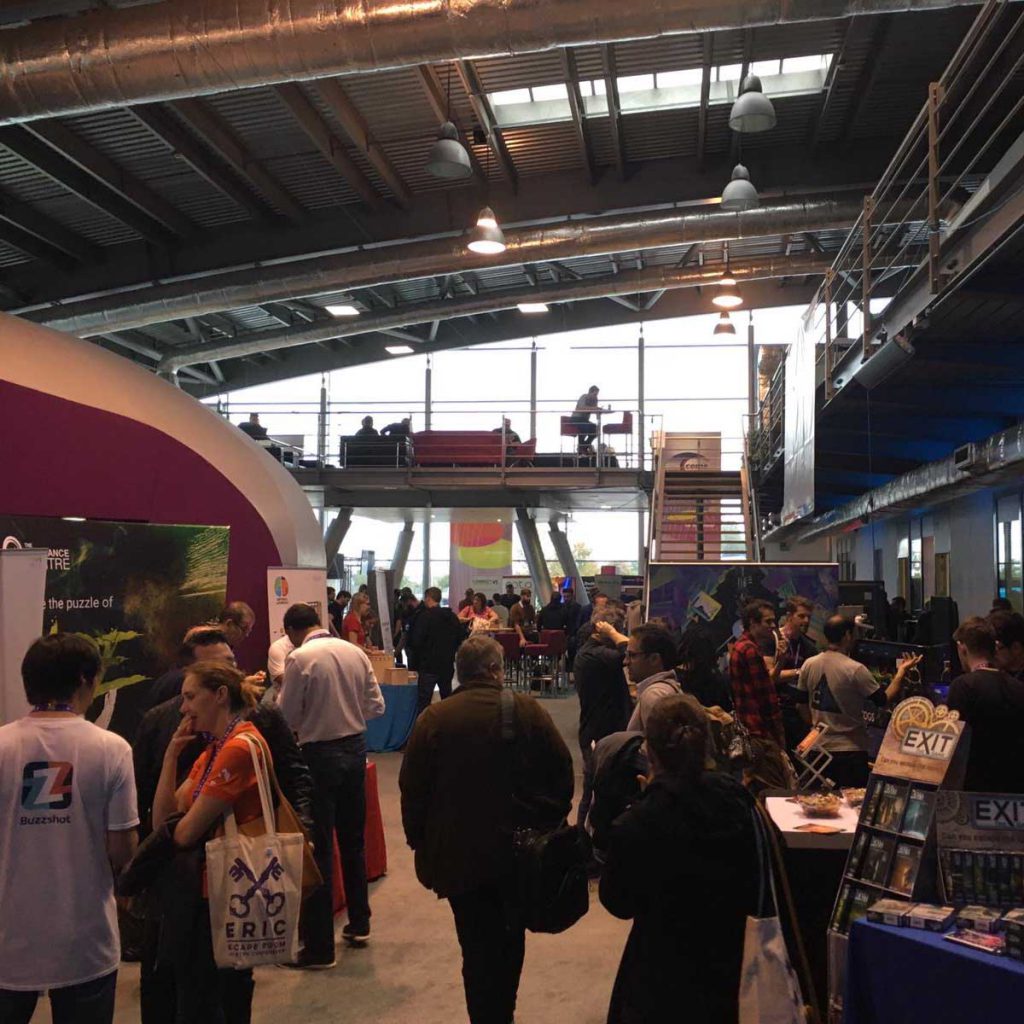 In October we exhibited at a great fair and wanted to share this experience because it might be interesting for you, as you might start your own business.
The fair contained many interesting impressions and a number of speakers and workshops where experiences, knowledge and expertise about Virtual Reality and the Escape Room Business were exchanged.
In addition to the exhibitors, the talk by Kevin Williams on “Location-based Entertainment´s VR opportunity” or workshops on marketing and better sales, as well as the networking evenings as inspiration and exchange offer a high added value.

It is still a rather small event, but very well organized and with great potential.
We would like to recommend this show to you, especially if you already work in the Escape Room Business.
On the website you will find more information and you can also sign up for a newsletter to be informed about next year’s dates.

Also have a look at the report from ESCAPETHEROOMers:
https://www.youtube.com/watch?v=OcBYxbDWVk0